Embed this image on a website using the embed code here.

The advanced VR-series engine, which was tested by the WardsAuto editors as offered in the Infiniti Q50 Red Sport 400, is available across the range of Q50 sports sedan models, as well as the recently introduced, all-new Infiniti Q60 sports coupe.

“Infiniti customers have a passion for driving and offering the new 3.0-liter twin-turbo V6 engine helps make sure we meet their high expectations,” said Roland Krueger, president, Infiniti Motor Company, Ltd. “Infiniti is honored to be named to this prestigious list of the most technically significant powertrains in the world by the experts at WardsAuto. We are on track for record global sales in 2016 and the exceptional engineering and performance of our engines have certainly played an important role in this success.”

The new Infiniti powerplant was chosen from a field of 40 new or significantly improved powertrains, alongside Wards 10 Best 2016 winners, in vehicles with a base price below $62,000 and available in the U.S. This is the 23rd year that Wards has assembled the “10 Best Engines” list.

“The Q50’s twin-turbo V6 puts Infiniti neck-and-neck with its German competitors,” said Dave Zoia, WardsAuto editorial director. “Silky smooth, quiet when you want it to be and capable of delivering some pretty respectable fuel economy numbers. We’re thinking the new VR engine just might be a dynasty in the making.”

The VR-series power delivery is enhanced through a new twin-turbo system, which enables smooth and immediate response under acceleration with power available across the rev range.

The VR-series V6 is the also the cleanest and most fuel-efficient engine of its type that Infiniti has ever offered, providing a 6.7 percent improvement in fuel economy versus the 3.7-liter V6 previously available in the Q50 and Q60. 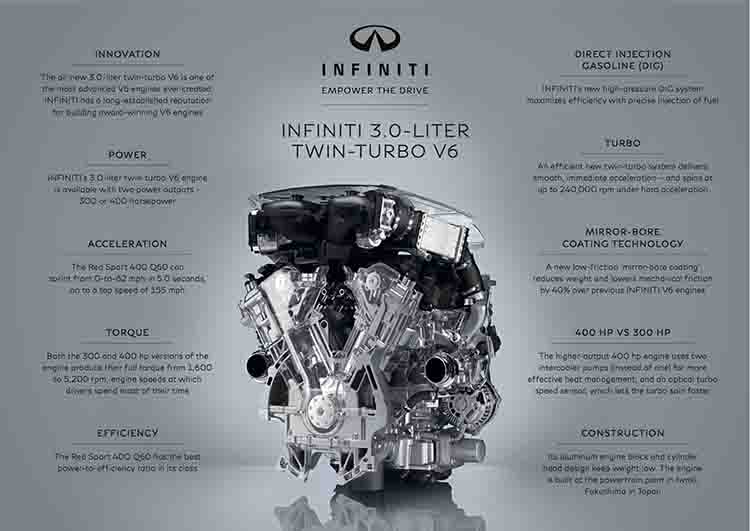 About Infiniti:
Infiniti Motor Company Ltd. is headquartered in Hong Kong with sales operations in over 50 countries. The Infiniti brand was launched in 1989. Its range of premium automobiles is currently built in manufacturing facilities in Japan, the United States, United Kingdom and China. Infiniti plans to also expand manufacturing into Mexico by 2017. Infiniti design studios are located in Atsugi-Shi near Yokohama, London, San Diego and Beijing.

Infiniti is in the middle of a major product offensive. The brand has been widely acclaimed for its daring design and innovative driver-assistance technologies. From the 2016 season, Infiniti is a technical partner of the Renault Sport Formula One team, contributing its expertise in hybrid performance.